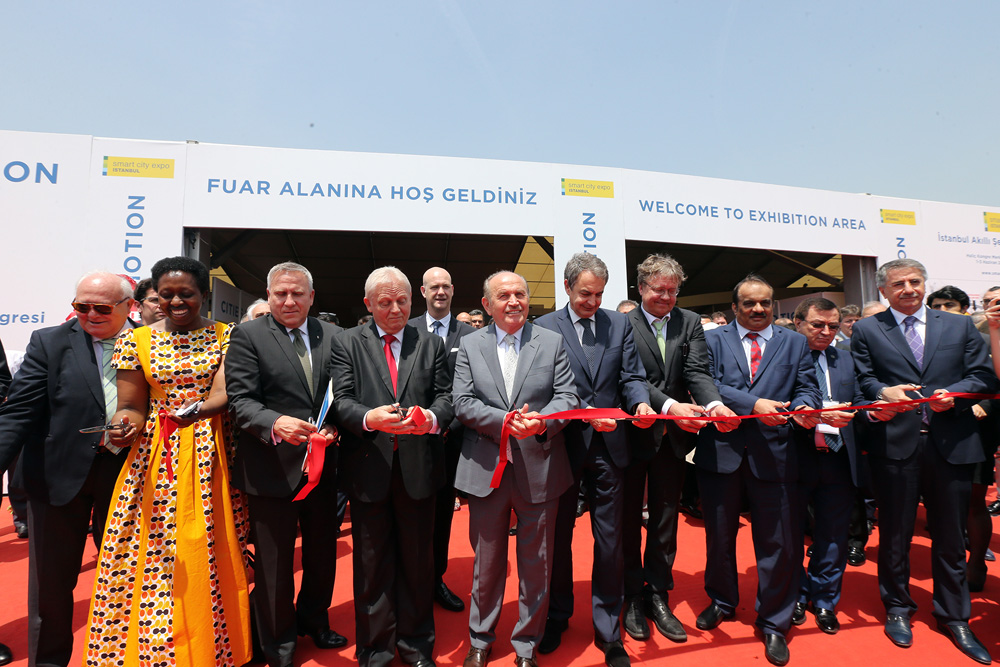 İSTTELKOM A.Ş., SMART CITY Information Technologies and Telecommunication Solutions participated in the fair which was organized in Turkey for the first time.

Numerous high level executives from various organizations and agencies from all over the world visited the stand of İSTTELKOM to have the opportunity to observe Smart City communication solutions in place.

More than 200 projects of 41 companies and 17 İBB affiliate companies were exhibited in the exhibition area of 11 thousand square meters where smart city applications were introduced together with the stand of Istanbul Metropolitan Municipality.

The objective is to ensure a more sustainable urbanism which is more environment friendly with more green areas to enable transition into a faster and more productive operation in the service sector with projects planned with the help of technology.

Mayor Kadir Topbaş made the opening speech at the congress which started with a short film introducing the smart city applications of Istanbul Metropolitan Municipality saying that Istanbul had been a capital of empires throughout its history of 2 thousand 500 years as well as a city bringing continents together. Mayor Topbaş reminded that Haliç Congress Center, the venue of the congress used to be a slaughtering and animal marketing center and said, ‘With the instructions of our esteemed President Recep Tayyip Erdoğan the area was planned as a congress center. As a result of the works that were carried out during our term we transformed this area into Haliç Congress and Fair Center. This area has become one of the symbols of change and development in Istanbul.’

The Importance of Local Administrations

President Topbaş emphasized that change and transformation in today’s world is an inevitable phenomenon and continued his speech as follows:

“Now the fate of people is interconnected. Sharing our knowledge and experience is an inevitable obligation. It is stated that in 2050, more than 70 percent of the world population will be living in cities. This will affect the economy in metropolitan cities. Cities are also attraction centers for people. Being a center of attraction is accompanied with social responsibility. The main problems are unemployment and crime.’

Mayor Topbaş said that local administrations were trying to succeed in doing a lot of work with small resources and continued, “Smart cities target a digital existence which provides savings in every area. Common goals need to be determined in terms of urbanization”.

The Correctness of the Decisions and the Form of Implementation

Mayor Topbaş, who emphasized the importance of governments to act together with local administrations, the housing sector and technology producing companies, said:

“Establishing high-standard cities can only be achieved through cooperation. For smart urbanization, not only technical transformation but also social transformation is needed. Cities have been using technology for years. As the use of technology increases, urban spaces rapidly transform into smart cities. Innovation is the second element in the lifeblood of intelligent solutions. Innovative technologies are important. Another element is to create conscious people. Conversion from traditional cities to smart cities is not a job that can be completed overnight. We might not succeed immediately.

Pointing out that success is directly proportional to the quality and application of the decisions taken, Mayor Topbaş concluded his words as follows:

“Cities are expected to allocate 1.5 trillion dollars by 2021 in the movement of smart cities. Intelligent public transport systems, energy-saving buildings, will save 22 trillion dollars by 2050. As party to these practices, we all have important duties. Knowledge and experience sharing is important. We must bring smart city applications to more cities, extend them. It is important to raise awareness among citizens. I believe that congresses and fairs will also make a significant contribution to smart city applications.”

Istanbul, much more than a Metropolis

Speaking at the program, former Prime Minister of Spain Jose Luis Rodriguez Zapatero reminded that along with President Recep Tayyip Erdogan they had initiated the “Alliance of Civilizations Project” and expressed his satisfaction with the alliance. Zapatero, who expressed happiness in being in Istanbul for the smart cities fair, said:

“Istanbul is much more than other major cities. Every city, every region and each country is accompanied with historical and geographical features. Few cities have done what Istanbul has and have such a geography. Those who want to observe how civilizations have developed cannot understand this very well without understanding the role of the great city of Istanbul. Turkey is a country that bridges cultures. It is the point that brings together civilizations. In terms of civilization Spain resembles Turkey.”

Zapatero reminded that when President Recep Tayyip Erdoğan was Prime Minister they had established the alliance of civilizations and extended his appreciation for President Erdoğan for his cooperation in this regard. Zapatero pointed out that the message of the alliance of cultures encouraged cooperation and humanity and said, “Istanbul is a very attractive and innovative city. Istanbul is a reference city for many cities and countries in the world. Istanbul is a city with a stunning history and incredible beauty. There are very few people in the world, who would not want to live in Istanbul. I would like to live in Istanbul. Most people would like to live in Istanbul.”

Turkey has opened its doors to Syrians fleeing the war

Former Prime Minister Zapatero thanked Turkey for its contribution to peace and said, “We see the Republic of Turkey in the forefront in the Middle East. Turkey has opened its doors to Syrians fleeing the war. Turkey has welcomed suffering, fleeing refugees”. Zapatero continued his speech as follows:

Thank you to Kadir Topbaş

Zapatero emphasized the importance of citizens taking ownership of the cities they live in and said that smart cities should generate transparency.

Zapatero said that he had had the opportunity to study the projects of  Istanbul Metropolitan Municipality Mayor Kadir Topbas at close range and said, “I would like to congratulate Mr. Kadir Topbaş. We’ve seen public transport projects. In smart cities, public transport, culture and the environment must be addressed. Istanbul oversees Europe and Asia. I want to see Turkey with its powerful history, this country with its dynamic and young population as a member of the EU. I have always advocated this. Turkey should be integrated with the EU in the 21st century for peace. Spain should  always support this integration. ”

Deputy Secretary General of Habitat Aisa Kirabo Kacyira stated that technology facilitates sustainable development, “Cities are the motor of economic growth. With the increase of technology, cities will also develop. However, technology must not support inequality among people. Technology must be accessible to everyone. More than 1 billion people live in slums and similar accommodation in the world. There are millions of people who can not access clean water. How can we be more united in this case? In order for cities to be intelligent and technology to increase, it must be comprehensive and accessible for everyone in a fair way. Cities have to be designed in the right way. In addition to being inclusive, employment must be generated for young people. ”

Touching upon the issue of Syrian refugees, Kacyiru thanked Turkey for the hospitality shown to refugees.

Mayor Topbaş who watched a presentation of the humanoid robot technologies on the panel, “Will the administrators be robots? Are we going to be dumped? ” Mayor Topbaş, who said, “If they are going to live with us in the future, why not” continued by saying, ‘There used to be horse drawn trams in Istanbul in the past, but now we have metros, even unmanned subways. Demands forced us here. I think that mayors need to act like CEOs. Not just a routine municipalism like a businessman, but everyone involved in local government needs to do it. ”

As the Istanbul Metropolitan Municipality, Mayor Topbaş emphasized that they are following technology closely and leading in terms of innovations. “We have developed IBB Simultaneous Application and obtained a patent. Now, guests from major organizations will be able to listen to the translation in their own language by dialing their mobile phones. ”

Stories at the Bus Stop Era

After the speeches, Mayor Topbaş and the other members of the protocol cut the opening ribbon of Smart City Expo Istanbul 2016 at the entrance of the fair ground.

After the ribbon cutting, Mayor Topbaş gave his guests a tour of the fair ground. Mayor Topbaş, who also visited the Istanbul Metropolitan Municipality companies that had opened stands at the fair, received information with the guests about new technologies. Mayor Topbaş who was also informed about the Smart City Management Platform, intelligent stops, intelligent intersection management system, also received information about the storymatic system that would be launched soon. President Topbaş, soon to be put into practice the storymatic system. With the system, passengers would be able to listen to short stories for a few minutes by having their AKBIL read while they were waiting at bus stops.