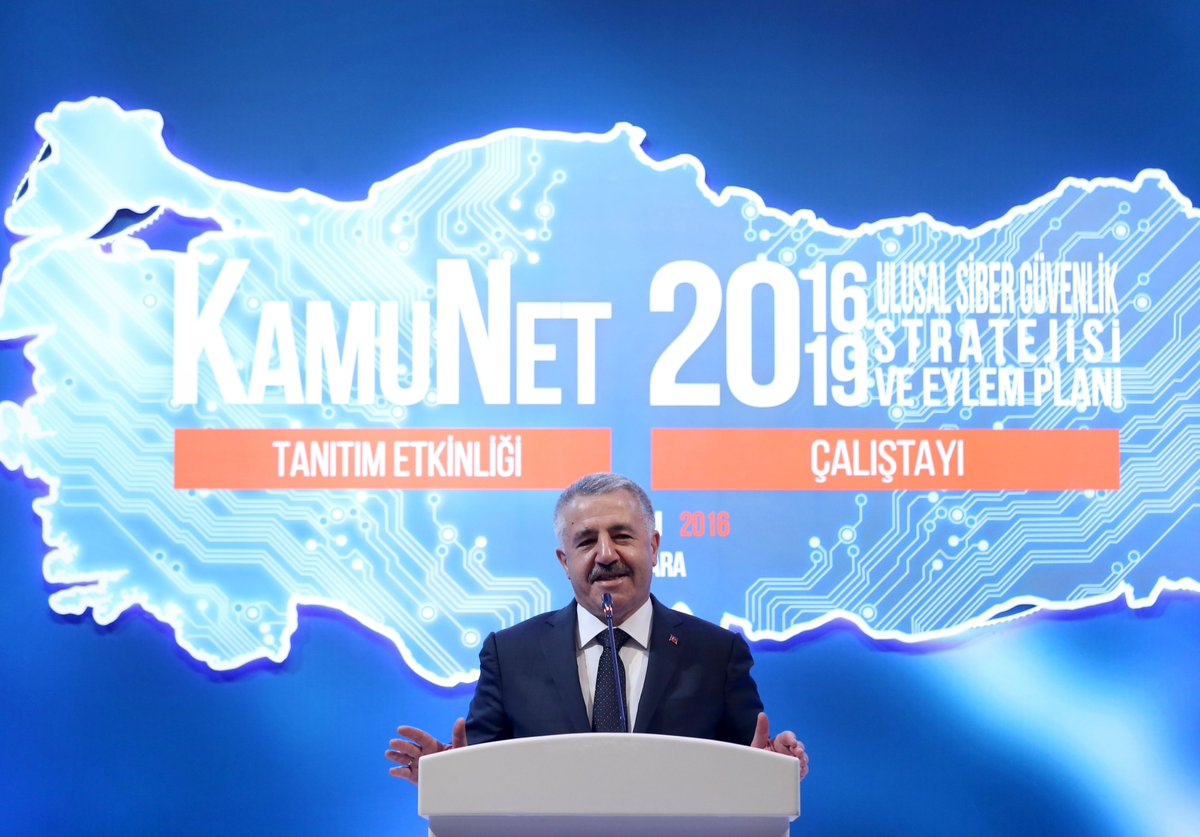 Minister of Transportation, Maritime Affairs and Communication Ahmet Arslan announced that a circular was being prepared for the use of the public network (public virtual network) in all public institutions and that it would be published soon.

At the opening of the 2016-2019 National Road Safety Strategy and Action Plan Workshop, Arslan said that the information and communication technologies have become an integral part of life and that developments are accompanied by various cyber threats which lead to security concerns in society.

Arslan said that the sector could not refrain from benefitting from the advantages to avoid cyber threats and that , ‘the bull has to be tackled by its horns.’

Arslan said that eliminating increasing threats in the cyber environment is of great importance in terms of the transformation process to the information society targeted by the country and that loss of life, large-scale economic damage, national security vulnerabilities and public order deterioration incurred when the confidentiality, integrity or accessibility of information deteriorated. Arslan, emphasizing that it is not possible to make any information system 100 percent secure said that, “It is important to minimize security vulnerabilities. There is a very apt phrase by Kaşgarlı Mahmut: ‘If the hunter knows traps, so does the hunted know paths.’ No matter how much cyber attacks are launched by the enemy, we have the task to take counter measures and find new ways . ”

“So far 8 organizations have been included in KamuNet”

Minister Arslan said that as a result of intensive work, a platform with end to end  security called KamuNet had been developed, and that the system currently included 8 institutions.

Arslan stated that KamuNet did not use the internet network open to the public and that cyber security risks had been minimized because only public institutions were allowed to communicate and that it is important for the whole system to be monitored from one point.

Arslan said that by communicating public data more securely over the KamuNet network, the security of large data infrastructures, where both public data and citizen’s personal information are stored would be provided.

Arslan pointed out that work was ongoing to include all public organizations in the KamuNet network and said, “I would like to emphasize that we are preparing a circular regarding the usage of KamuNet by all public institutions which will be published soon. In the near future, the cyber security of relevant public organizations in terms of KamuNet will be provided. ”

Arslan expressed that with KamuNet, the infrastructures of public organizations would be promoted to the league of countries with the highest security, however he stated that ensuring cyber security was not limited to measures to be taken in the public domain only.

Arslan reminded that masterful computer hackers targeted novice computer users and it was a known fact that cyber attacks carried out by zombie computers last month had interrupted Internet access in many countries.

Arslan explained that Turkey ranked among the leading countries in terms of cyber hacking and that this was caused by the rapid development of the sector and the setting of big goals and continued as follows:

“According to Fortinet Threat Landscape Report, 45 percent of the computers in Turkey are under cyber attack. This is a rate that demonstrates that we need to take robust and serious steps to improve our cyber security. In terms of captured computers we rank in 4th place in the world. For this reason, the most important stage of cyber security is the raising of user awareness which is one of the issues that we are trying to do. The Cyber Security Action Plan which was launched in 2013 to cover all institutions will be an important step in raising awareness on security and providing a holistic sense of cyber security. In this sense, we created intervention teams for Corporate and Sectoral Cyber Events. The number of teams is currently 517 and proceeding very successfully.”

“Energy spending ranked first in the establishment of data centers”

Arslan emphasized that this strategy and action plan has been strengthened by participatory and innovative strategic steps and has been prepared to contribute to the establishment of the ecosystem by covering and giving responsibilities to all stakeholders, including the public and private sector, universities and NGOs.

Arslan mentioned that yesterday Prime Minister Binali Yıldırım had spoken about increasing the number of data centers in Turkey and asked for support in the presentation he made to the Council of Ministers on Monday regarding the subject because energy costs for the establishment of big data centers to keep personal and public data generated in Turkey in the country incurred major costs.

Arslan indicated that the issue had been addressed in the Decree Law published yesterday and continued as follows:

“We appreciate this. Our aim is to give energy support in particular, to consider this energy on par with industrial electricity if necessary, to provide support in terms of personnel expenditures, taxes, SSK matters, to minimize or zero customs taxes for initial installation, to provide credit support, to allocate land, in particular to allocate public land free of charge. In other words, we have established centers of attraction to eliminate the difference of development between 23 provinces in the east and other provinces and we have provided a lot of support within the scope of these attraction centers. We will give support and initiatives to equalize this sector with those attraction centers. Our intention is to grow and develop the sector, ensure that the data in our country remains here and if possible, even to recruit investments from abroad and establish big data centers in our country. We know that this sector is an indispensable part of facilitating the economy, trade and overall life.”

Minister Arslan indicated that the sector is the most important sector in terms of employment in the future and said, “because no matter who you serve wherever in the world, whose needs you fulfill anywhere in the world, you have the chance to do it from wherever you are with a single key stroke.”

Ömer Fatih Sayan, President of Information and Communication Technologies (BTK), said that cyber security is a national issue and that there is a need for more macro-level security controls in addition to controlling access to systems.

Indicating that KamuNet would provide cyber security for the public, Sayan expressed that it is very important for information not to get out.

General Director of Communications Ensar Kılıç noted that KamuNet which had been established to minimize cyber security risks by providing a more secure network for data communication between public institutions has been commissioned as of today and that institutions are now taking their places on the system.