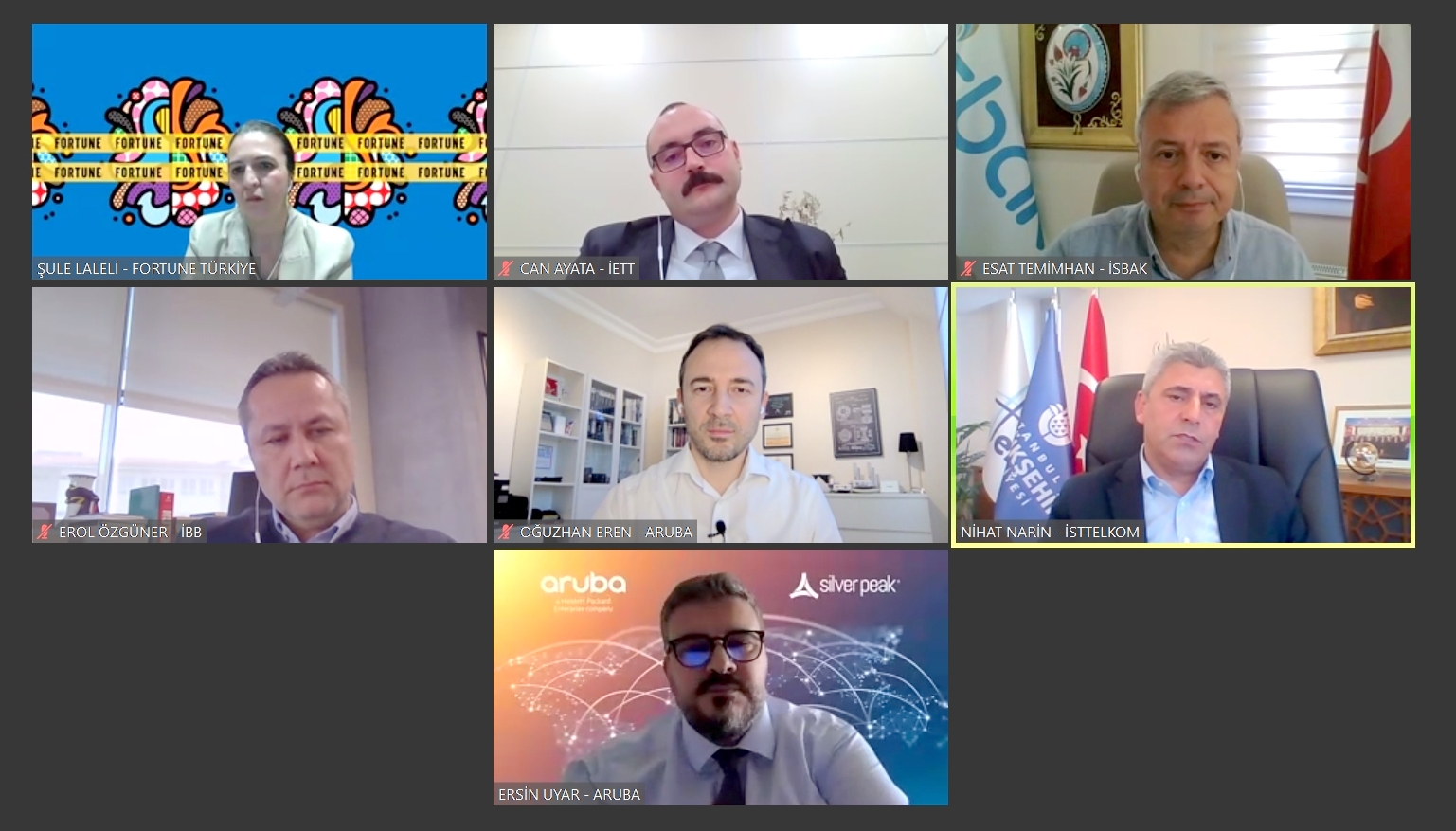 COLLABORATION IS ESSENTIAL IN FIBER INFRASTRUCTURE

İSTTELKOM General Manager Nihat Narin, İSBAK General Manager Esat Temimhan, Head of IMM IT Department Erol Özgüner, Head of İETT IT Department Can Ayata and representatives of the private sector remained at the online panel held by the Fortune Turkey magazine. Executives of IMM’s IT Group relayed information on the activities carried out as part of Istanbul’s digital future at the digital roundtable meeting titled “Smart Management in Cities” moderated by Şule Laleli.

İSTTELKOM General Manager Nihat Narin pointed to the infrastructural deficiencies as the most critical item of digitalization agenda at the panel. Narin continued; “Fiber infrastructure is the essential component of the Smart Cities and we have to focus on this issue altogether. The distance created due to the pandemic has been covered with the communication technologies. Yet, today a meter-deep fiber installation may take up to a 270-day’ long wait. Existing policies and regulations fail to provide the appropriate circumstances for the expansion of broadband services.”

According to the latest data provided by the Information and Communication Technologies Authority (ICTA), Turkey’s total fiber optical infrastructure is 400 thousand km long. 52 thousand km of it remains in Istanbul.

“AS IMM WE ARE WILLING TO MAKE SACRIFICES”

Sharing details on the issue, Narin added that while fiber optical length per capita in Europe was 500-600 meters, Istanbul’s figure remained merely at 3-4 meters, making the city lag quite behind the developed countries. Narin continued: “For the effective expansion of fiber infrastructures, establishment of a joint infrastructure formation including the local administration organizations and telecommunication companies led by our Ministry and based on the sharing economy model will be useful. There are many efficient examples of this model in the world. As IMM, we are ready to make any contributions and sacrifices to this end. Besides, joint investments will prevent double installations and the waste of resources to a substantial extent.”

“PLANNING TO OPEN A DATA LAB AT IMM DATA CENTER”

Taking floor at the panel, Head of IMM IT Department Erol Özgüner stated that cyber security became ever more crucial due to the smart city applications becoming more prevalent. Özgüner underlined the critical risks due to the telecommuting model during the pandemic and mentioned that they were employing all the technologies in cyber security area effectively and aimed to maintain the awareness in this area at the highest level possible. Özgüner continued;

“We wish to launch many new projects in 2021. We will initially expand the portfolio of our open data platform further. Our efforts for achieving compatibility with the Law on the Protection of Personal Data (KVKK) continue increasingly. We aim to launch a laboratory that focuses on data analytics within the IMM Data Center. We also intend to increase the accessibility of the disadvantaged groups. Moreover, by uniting all the IMM mobile applications with a new super app we wish to present our citizens the best user experience in this area in the new year.”

“DIGITALIZATION OF ALL TRANSPORTATION SYSTEMS WITH THE ATAYOL PROJECT”

Can Ayata, Head of the IT Department at İETT, touched upon Istanbul’s smart city transportation vision and introduced İETT’s Smart Transportation and Passenger System (ATAYOL) Project, one of the most prominent and recent activities as part of digitalization.

Ayata said, “With the ATAYOL Project, we aim to render all transportation systems smart and provide a faster and more secure commuting experience to the citizens with a system that achieves efficiency in many areas such as artificial intelligence assisted lines, vehicles, drives, service and passenger optimization, vehicle notification. We launched the electrical bus transformation process in our services. Within the context of Smart City implementations, we continue our services in this area uninterruptedly with the Smart Stop and Mobiett applications. Our target regarding the transformation services is to increase the accessibility through new mobile applications further.”

Esat Temimhan, İSBAK General Manager, noted that through the Smart Management in Cities initiative, they aimed to increase their contact with the people and the living standards of the residents of Istanbul. Temimhan said; “Within the context of Smart Cities, we need to launch a change based on people and render it sustainable. In our transportation services, we process the data we collect from the field with artificial intelligence and direct our services and activities accordingly.”